If you want to add a place for fun, excitement, and exercise to your home or business in Phoenix, AZ, consider a bocce court. Arizona Artificial Lawns installs artificial grass bocce ball courts for home and business owners in North Phoenix. Synthetic turf is ideal for bocce ball, whether you want to give your children or an elderly parent a fun way to exercise or you’re considering adding bocce ball to your commercial entertainment facility in Scottsdale or Paradise Valley. Bocce ball is an easy game that your whole family can enjoy. Synthetic grass bocce ball courts are an excellent addition to senior housing communities, apartment complexes, recreational facilities, and more. Learn more about artificial turf installation and get in touch with our experts for an estimate. 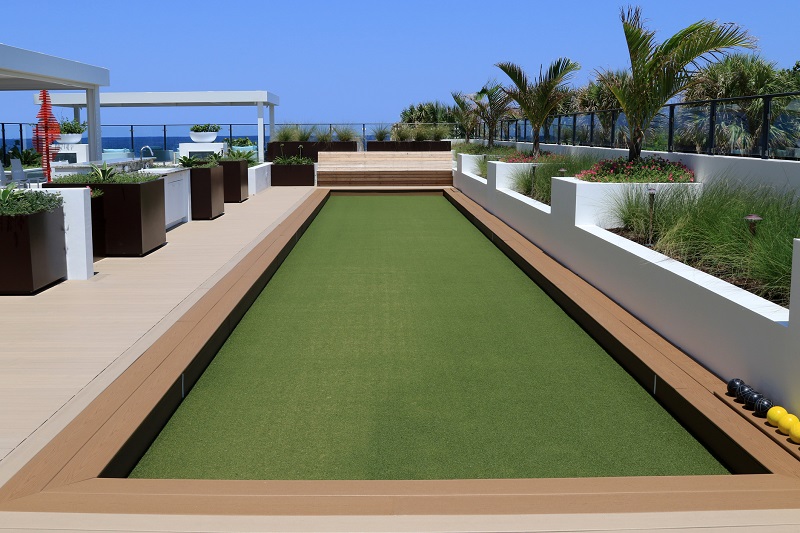 Artificial turf is one of the best choices you can make once you’ve decided on a bocce ball court for your property. You’ll enjoy a lush green playing space year-round. Artificial grass is a much more aesthetically pleasing choice for a bocce court than crushed rock or dirt. You won’t need to maintain the court much as it will only require minimal care. Keep the following elements in mind when determining the best substance for your new bocce court:

Choosing artificial grass installation from Arizona Artificial Lawns will help ensure caring for and maintaining your bocce court is easy. You won’t need to mow or weed your court with artificial turf. Just remove debris such as twigs or leaves. Rinse your court off with water to get rid of dirt and dust.

When deciding which material to choose for your new bocce court, it’s essential to consider all the benefits of artificial turf. Bocce can be played on multiple court surfaces, including stone dust, clay, grass, and dirt. Check out some of the reasons why artificial grass is your best option:

Once you decide you want to add a bocce ball court to your property, you should know some interesting facts about how the game was created, the rules, and more. Check out these fun facts on bocce ball:

Get Your Bocce Court Estimate Today

Arizona Artificial Lawns would be happy to answer your questions about installing a synthetic grass bocce court for your home or business. We also install putting greens, playgrounds, batting cages, and more. Contact us today to get your bocce court quote.

Back to the top